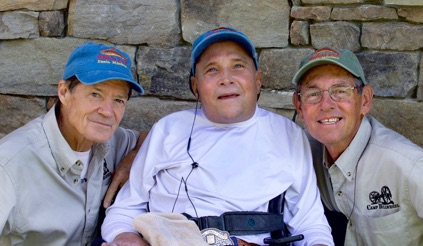 2018 was our inaugural season with our first guests arriving mid-June and the last guests departing late September. We are overjoyed at the response we have received from a variety of people from all over the country. Our long-term goal is to build a state-of-the-art facility to accommodate special needs individuals.

Camp Bullwheel began with the pairing of two like-minded men: Peter Pauwels and Frank Bell. With a friendship dating back to the mid-seventies, these gentlemen took on interesting renovation projects in Colorado while establishing a good working relationship. Years morphed into decades as both men were pulled in a variety of directions.

In the summer of 2017 Bell had an epiphany, realizing he had an older rental house perfectly situated to allow Pauwels to realize his life-long dream of hosting disabled guests, and giving them an outdoor experience with fishing at the forefront. Quite interestingly, though Pauwels was enthused, he was quite tied into his Colorado commitments, float fishing people with disabilities on the Colorado River. In Peter’s words, “I sure like the concept, but it’ll be a year or two before I can consider this Montana option. But I’ll run up and take a look.”

Bell organized a lunch meeting in Ennis, Montana in September of 2017, pulling together a group of eleven varied individuals, all bringing specific experience to the table. Right then and there Camp Bullwheel was launched. After lunch, Bell and Pauwels surveyed the property in earnest, taking notes, measurements, pictures, etc. and immediately began planting seeds for the coming summer with a firm beginning renovation date of April 1, 2018. Peter was solidly hooked!

The month of April ranged from full-on winter to delightful spring weather, but these two prevailed as the house, out buildings, and property were adapted with the goal of hosting their first disabled clients in the middle of June.

Pauwels had volunteered at Craig Hospital in Denver for over twenty-five years and had a strong team of fellow volunteers supporting his every goal. With a phone call here, and an email there, Peter’s followers heeded his call and an amazing plethora of like-minded, caring individuals arrived to help move the project forward. In a nutshell, our team of volunteers is awesome and growing rapidly. The Craig connection also provided our very full first season roster of guests because of Peter’s ongoing relationship with many of the patients.

We are extremely proud of our first two seasons and have bookings and a waiting list for upcoming years. While 2020 was a regrouping year, Peter did succeed in getting a variety of individuals and groups out on the water. 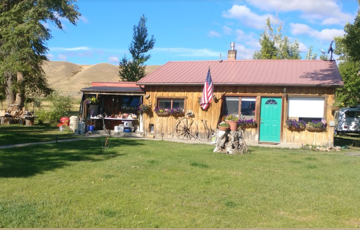 Our new boathouse was constructed in April of 2021 and will be multi-use.

Our third founding director, Chris Clasby passed away in April of ’21. His strength and example was the inspiration for Camp BullWheel right from the beginning. Chris became a quadripelegic as a teen and recovered at Craig Hospital in Denver where he met Peter. His enthusiasm and eagerness to help push us along will never be forgotten. RIP Chris Clasby.